Rather than getting my first tattoo as planned, I signed up for the five-week “Imagining” course through the online art collective Sketchbook Skool. If you’ve never taken a course from them, I recommend it: they have excellent instructors, you can take it at your own pace, and there’s an incredibly supportive community available over a number of platforms. You don’t even have to be enrolled to join the Facebook group if you want to pop in there and see what people are up to.

The assignment is to do one drawing a day for a week and have each drawing connected to the others by a theme. This can be a colour, word, idea, character, page element, etc. I chose to develop the character of the Robot, and to also use the same horizon line throughout for a more narrative continuity. There are eleven or twelve folds in my book depending how I count them, so I’ll keep going beyond the seven day objective until it’s done. I’m probably going to colour it as well. I think I want it all drawn before I make that decision.

I first drew the Robot in 2007 as part of a Valentine’s Day card I sent to a friend. I’ve recently been paging through old sketchbooks looking for doodles while daydreaming about making my own stickers and was really excited to find the Robot again. My friends Gary and Jen were suggesting I make a sticker set of the Robot having adventures (Stealing muffins! Ostrich wrangling!) and I decided to take that suggestion and turn it into the assignment.

The notebook is a concertina format, which means it opens like an accordion, rather than having signatures of individual pages. I’ve had it for quite a while and have never been quite sure what to do with it, so it’s nice to be able to incorporate it into this assignment. The paper is quite fibrous and has very visible threads of coloured pulp throughout. While I don’t mind the texture of the paper, I find that the visible threads make the page look dirty to me, and I keep attempting to brush them off like you would with eraser snow. Apparently I am really accustomed to working on blindingly white paper. I had intended to complete this project in pencil, but found I was having contrast issues and that using a darker pencil lead to more smudging given the soft texture of the paper, so ink it is! I am focusing on basic line work right now and will decide if I am adding additional texture later when I start thinking about colour in earnest.

I’ll be posting my progress here, directly to Facebook on my Monocled Octopus page, and also in the Sketchbook Skool Facebook community. If you want them, the hashtags for the project are #sbsimagining and #sbsimaginingw[#]d[#], where the #’s are the week number and the day number within that week. 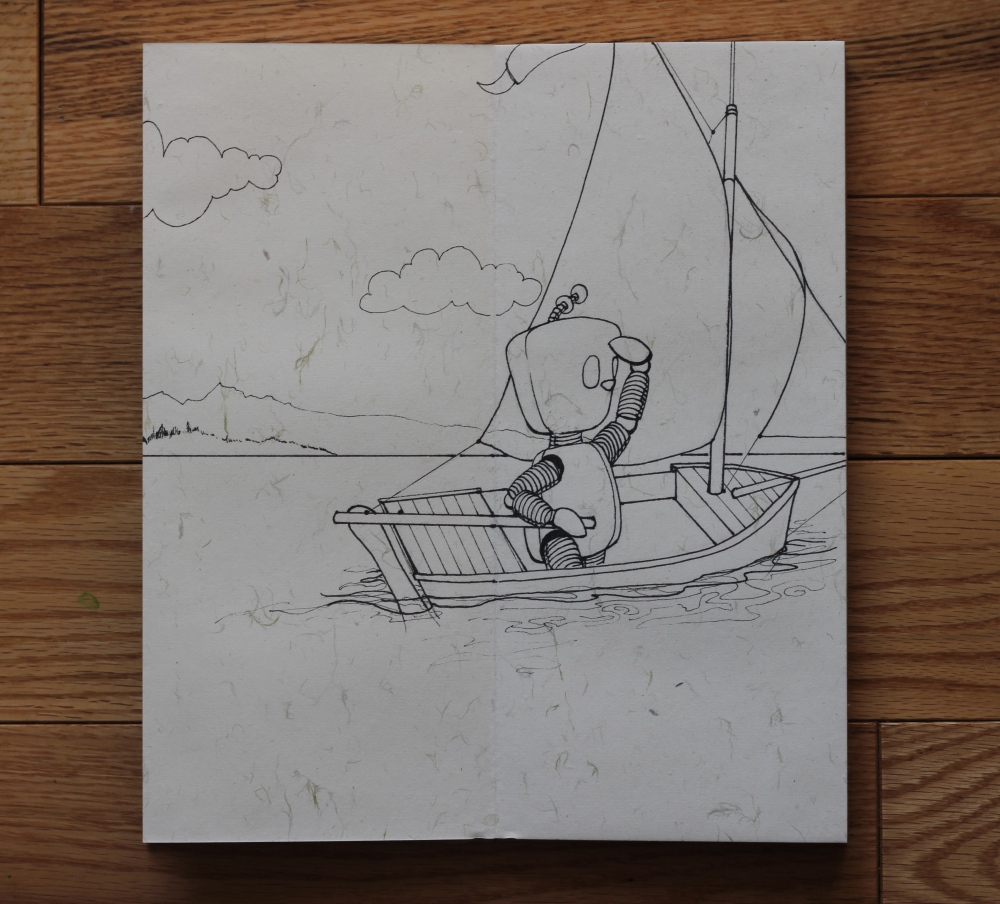 Anyway, thanks for checking this out!